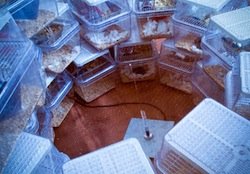 Alzheimer’s Disease Research and the Media

Most press coverage is about “associations” between using cell phone radiation and illnesses. Studies rarely show that mobile phones directly cause human illnesses such as cancer and Alzheimer’s.

Whether placing an RF device near your head causes health problems is open to disagreement in the scientific community, although the latest Alzheimer’s disease research indicates no direct cause and effect.

Before everyone carries a mobile phone,  studies about electromagnetic radiation are usually limited to employees of telecommunications companies and military workers exposed to radar.  As the public buys more mobile devices, every journalist feels compelled to write his or her quota of stories about cell phones and wireless health.

The latest study from researchers at the University of South Florida, published in the Journal of Alzheimer’s Disease, concludes that electromagnetic radiation may prevent and even reverse Alzheimer’s disease–at least in mice, if not humans.

The researchers assembled 96 non-voluntary mice, put them in cages around an antenna emitting electromagnetic radiation and subjected the poor creatures to a daily dose of RF  for one hour a day over nine months. Clearly this is something you wouldn’t do to your worst enemy. Alas, they’re plenty of mice around.

The team of neurologists and other medical researchers were amazed to discover that EM exposure actually improved memory and reduced the plaques associated with Alzheimer’s.

The press release issued by USF caused a flurry of reportage by dozens of newspapers and online publications summarizing Alzheimer’s disease research.

While they’re conflicting reports about Alzheimer’s disease research and cell phone radiation, I’d put it at the bottom of my list of things to worry about, such as bridges falling on me, the economy collapsing and Arnold Schwarzenegger running for President.

Don’t get me wrong. Alzheimer’s disease is critically necessary to find a cure. I only wish the media would treat the studies more seriously and avoid the humor.

With all the rather gruesome things happening in the world, a cell phone study showing positive outcomes for those with Alzheimer’s is of greater interest, despite journalists jumping off cliffs like lemmings.