You are here: Home / mobile technology / How Mobile GPS Enables Location Based Services 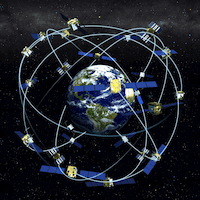 Thinking of using mobile GPS to find your friends on your new smartphone? Think again. The global positioning system (GPS) is under strain. Why? Mobile device consumers, the military, and businesses demand greater accuracy and reliability. GPS also has a direct impact on location-based services.

In 2009, the U.S. House of representatives asked the GAO (Government Accounting Office) to study how long GPS service would last. Its report concluded that the Air Force, responsible for maintaining 24 GPS satellites is struggling to maintain service levels.

Starting in 2010 until the end of FY 2014, military and civilian users may experience service level drops approaching 80% of capacity. The timing is bad. Four out of five mobile phones, according to the NPD group in the 4th quarter of 2009, had GPS capabilities.

In the past, phone-based navigation was mainly used by pedestrians, but Google changed the game when it introduced turn-by-turn travel with Google maps.

But if you thought that its future is navigation, think again. Location-based services and social networking will dominate mobile GPS as smartphones increase, further reducing satellite performance. What will be the impact on geotagging and our 4G wireless world?

Mobile GPS: How the System Works

Most people take the system for granted as they watch their vehicle screens light up with colorful maps or mobile phones display their locations. Behind the scenes, however, a complex system is working overtime to deliver latitude and longitude information to wireless devices.

A few snippets of info about our global system.

Imagine early explorers sailing across the oceans searching for unknown worlds with only the stars to guide them. Next time you use your mobile GPS device, look up at the sky. The future awaits.