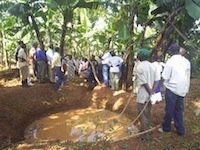 African cell phones, along with the mobile Internet, are helping the continents’ countries, like Uganda, reduce crop losses and improve commerce.

Africa, the largest continent on Earth, is now the fastest growing mobile phone market in the world.

The New York Times indicates that Uganda loses $70 million to $200 million USD each year due to banana crop diseases. Bananas represent 40% of Uganda’s agriculture and feed 12 million people in only one African country.

One Ugandan farmer,  quoted in the Times article, said: “’We never had any idea about getting information with the phone…It was a mystery. Now our mind is wide open.’”

As of June, 2009, only 2.5 million Ugandans had access to the Internet, while the highest number of African Internet users are in Egypt, Nigeria, Morocco and South Africa.

These figures do not represent access to the mobile Internet. However, since the number of personal computers is so low on the African continent, due to the lack of telecommunications infrastructure, mobile phones offer the only realistic solution for Web access in Africa. (For more Internet statistics by country, see this Internet usage report.)

According to the Guardian:

“Mobile usage is ballooning across the continent and the African mobile phone market – at more than 400 million subscribers – is now larger than in North America. Some countries, such as South Africa, have ‘mobile penetration levels’ – the number of handsets compared with size of population – close to those of Western Europe.

For many people in Africa, mobile telephones are the only way that they will ever get access to the internet because of the poor quality, and often complete lack, of fixed-line networks. Fierce competition has pushed mobile prices down for consumers while many of the latest crop of handsets available in Africa allow easy access to the mobile internet. Web browsers can also be installed on older phones.”

As mobile handsets and cellular networks grow across the African continent, new mobile phone services and applications will naturally emerge, not only saving bananas in Uganda, but growing mobile commerce and other wireless applications.