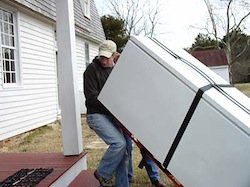 Have you noticed that mobile wireless
accessibility isdropping?

As I wrote in a post called “Mobility, Portability and Accessibility in a Wireless Age,” mobile and wireless devices are becoming larger, causing transport problems as new mobile gadgets flood the market.

Despite phones shrinking in weight and size since Motorola introduced the first cell phone–the Dyna-tech in 1983, only 2.5 pounds; 9″ X 5″ X1.5″–the latest smartphones and other MID’s (mobile Internet devices are getting BIGGER but LIGHTER.

Smartphones, which account for nearly 20% of new phones sold in the U.S., are the main culprits. Due to higher resolution screens, 5-8 megapixel cameras, GPS, MP3 players and other built-in features, phones are becoming wider and longer as their weight drops.

Next consider tablet or slate computers, eReaders and  wireless devices. These mobility products are

approaching the size of netbooks with larger displays. But try stuffing them into your pocket or purse. Out goes portability unless you love carrying cases and bags.

So what’s the answer to this surge in mobility technology products? How do we maintain mobility with smartphones, e-readers, hand-held GPS units, slates and other wireless gadgets?

Devices like Nokia’s ClipIt that fold when transported and open when in use are possibilities. Here’s another fold-able multi-function device:

Qualcomm filed a patent for a device that folds in three parts, making it usable as a media player, tablet computer, alarm clock, a television and, yes, even a cell phone. Keep in mind, though that a lot of patents are filed that never materialize into marketable products. 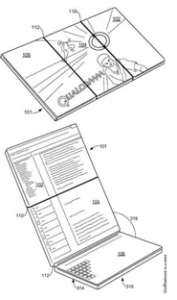 Winston’s (Polymer Vision) folding e-paper device, folded, is the size of a business card. While the company hasn’t announced wireless connectivity yet, this 5-6 inch device, due for release in 2010, is a definite contender in the eReader market.

Thousands of manufacturers are developing mobile and wireless hardware and software for mobile learning, commerce, entertainment and business uses.

By the end of 2012, around 6.5BILLION people will own six BILLION mobile phones and another six BILLION wireless devices.

Get ready for a slew of bigger, lighter, mobile and portable devices in the months ahead.