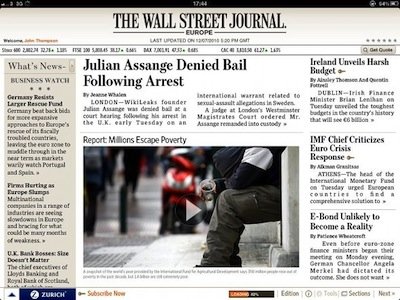 A month earlier, I called the Journal about the upcoming renewals. Customer  service told me the iPad subscription alone was $204 and print and online–my current set-up–was slightly less.

Today CS told me print and online jumped to over $300. So I cancelled my existing plan and signed up for the iPad  Wall Street Journal App, which includes iPad mobile for iPhone and BlackBerry phones.

The Decline of Print Newspapers

For  years, like other newspaper readers, I became concerned about the future of print journalism. Our Silicon Valley paper, the San Jose Mercury News, has gradually shrunk in size, leaving the sports section larger than the business pages. Media News, a publishing conglomerate, purchased most of parent corporation Knight-Ridder’s 32 papers, including the Mercury. Although the digital version of the paper has improved, I finally reached my frustration level. Since the paper’s news content was so meager, I cancelled.

Meanwhile, the Wall Street Journal continued growing in-depth and quality. Its recent series of articles on marketers and the ad industry tracking our online behavior convinced me of its reporting excellence.

When the iPad arrived, my hope for digital print media rose. The “above the fold” Wall Street Journal–just $17.29 a month–resembles the print edition of the paper in landscape mode. With a quick right-to-left swipe of the finger, the screen quickly moves to the next page. Swiping your finger straight down returns you to page one, while pressing and holding the mast head causes a pop-up screen to appear, easily letting you select different sections of the paper.

There’s even a start screen for viewing the previous seven issues. Choose the “Now” choice for the latest news and information that updates the print edition, one of the biggest challenges facing the print industry. As soon as it hits the streets, the news is already dated.

Similar to Kindle and iPad books, readers may also save sections of the paper for later reading offline. The Europe and Asia editions are also available with one tap and readers may quickly email and select text size.

What distinguishes the Ipad Wall Street Journals’ display is the quality of the photos, graphics and ads. On the Kindle, photos and other graphics blur. On the iPhone and BlackBerry, due to the smaller screen size, banner ads are crisp but tiny. The iPad’s screen size and resolution improved both.

Advertisers and their agencies have waited for the “year of mobile” when the’d  feel confident using mobile devices. With the iPad, they can now display full-color, high-resolution ads that are strikingly sharp, even beautiful .

The “please turn to page 8” has always been a thorn in my side with print publications. In a computerized age, we’ve become used to point-and-click website navigation. The iPad Wall Street Journal App’s navigation easily and quickly moves to desired articles. On the front page, the “What’s News” index is now a vertical roll-up column so readers can scan, find content of interest and click. Within two seconds the article appears.

Dissimilar from typical six-column print newspapers, the digital iPad version has four, easy-t0-read columns, making the LCD display proportionally similar to the print version. This nicely fits the width of the paper’s masthead.

The Wall Street Journal’s online edition previously featured videos. Now, using the touch screen capabilities of the iPad, tapping a photo once or twice enlarges it to 75% of the screen display. Readers can enlarge videos using typical two-finger squeeze and pinch or by double-tapping.

This is the best digital print display of any publication I’ve seen on a mobile device. And it offers traditional print and online publishers ways to improve user satisfaction while monetizing their publications.