You are here: Home / Social Media / Mobile Music Location Based Services at Soundtrckr

But you haven’t merged mobile music, social networking and geotagging into your life.  Soundtrckr, a new mobile music streaming service, may be your salvation.

It’s a  “geosocial music service” that currently runs on iPhones, iPod Touches and the iPad. (Android, Symbian and BlackBerry folks will have to wait a while.)

With a fully licensed library of more than 7 million songs, Soundtrckr was founded in 2008 and began commercial service in January 2010. Unlike Pandora Internet Radio, the Soundtrckr mobile music experience is created through a mutual exchange between people.

Danielle Calabrese, Soundtrckr’s CEO and President, wants you to experience mobile music to the ultimate, sharing songs and “sound tracking your life.” Unlike our past, filled with Walkmans, iPods and MP3 players, today we share location based services, such as mobile music. It’s important to our lives in real and staggered time as music streams from the Internet cloud.

Services such as VodoModo and HearPlanet deliver streaming video, one of the fastest-growing mobile services. Soundrckr is plain vanilla audio laced with the emotions that only music generates in our minds and hearts.

“Music is a shared experience, a way to communicate and connect. It’s intimately tied to the people and places in our daily lives. And Soundtrckr claims it’s the first application that recognizes and facilitates this connection in a concrete way. Soundtrckr makes our cities and friends active participants in the way we experience music.” This geolocating experience lets people share music that’s always 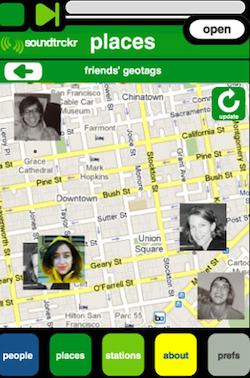 around us–parts of our lives that communicate emotions,  feelings and memories experienced at points in time and space. Elliott van Buskirk, who reviewed the service for Wired, wrote: “Suddenly, even though I was listening alone, I didn’t feel quite so alone.”

Mobile music is about discovery, delivering the right song to the right person using filters. Friends suggest music based on location and mind-set. It’s not a top 40 playlist; rather, it’s music that exists in our heads and hearts, drawn from a lifetime of experiences.

Mike McGuire in an article for Gartner said this about Soundtrckr:

“What users can do is seed a “station” based on a song or artist on their device. Soundtrckr then the system starts driving related songs from Soundtrckr’s seven-million-track catalog (licensed from the labels so they’re not paying a webcasting royalty), based on the usual elements: genre, artist, band, album etc., etc.  The added twist is that the playlists can be tagged to a location and the iPhone app can help users find fellow Soundtrckr’s and their playlists by location”

In the podcast, Danielle paints a picture of his dream for the company and how Soundtrckr integrates mobile music, social networks and geotagging technology.

Daniele Calabrese, Founder & CEO of Soundtrckr,  is the former Communications Officer with the Development Communications Division of the World Bank, where he focused on wireless technology, infrastructure, telecom, energy, public sector reform and climate change.

During his tenure Daniele initiated the First World Congress on Communication for Development, and spearheaded numerous international communications efforts involving mobile technologies. He holds an MA in International Affairs from George Washington University and a Political Science degree from Istituto Universitario Orientale in Naples, Italy.