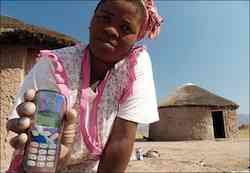 Mobile phone growth is exploding in developing nations and continents worldwide. In fact, Africa has one of the largest growth rates in voice, mobile Web and mobile commerce channels.

For those who haven’t read the excellent series of six articles on telecommunications in emerging markets (The Economist, 9/26/09), I highly recommend you do.

The six articles provide a broad perspective on wireless growth within the developing world. The striking disparity between mobile phone growth in developed and developing nations is humbling. While mobile users in the United States, Europe and Asia enjoy the benefits of affordable voice and data services, most of the rest of the world is only beginning to prosper from voice services.

In Africa, one woman’s life improved with a single mobile phone. She micro-financed a loan to pay for the phone and small antenna. Earning a little amount of money from each phone call, she was able to build a sustainable business by buying a second phone.

As handsets dropped in price, others in her village bought their own phones, paying more for phone service than for water, energy and other necessities. People in developing nations have discovered that mobile phone growth accelerates economic prosperity.